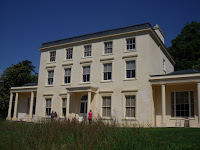 We had the best of times down in Devon, but the most memorable for me was our visit to Greenway: Agatha Christie’s Summer Home, which she visited every summer from 1938 until her death in 1976.

Apparently, she never came to Greenway to write. Instead she would read her latest manuscript to her family after dinner - now why won't my family let me do that? The retreat also gave her ideas for her novels; the setting for Dead Man’s Folly was based on Greenway and its boathouse; a magical, haunting building. Whilst I was in the boathouse, I sat on Agatha’s chair, hoping some of her talent would wear off on me! I've bought a copy of Dead Man's Folly and will read it with a different perspective now, imagining how she was seeing the setting as she wrote. 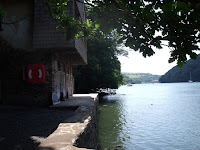 Greenway is now owned by The National Trust, and is only a short ferry ride away from Dartmouth. Wonderful!

We also visited Burgh Island, a beautiful place, where Burgh Island Hotel sits in all its Art Deco splender. Amongst other famous people, Agatha Christie visited here too. She used the setting for her novels 'Evil Under the Sun' and 'And then there were None'. 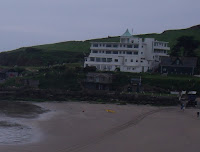 And talking of 'and then there were none' have a little lookie at my word count – Yep, back to zero, as I begin a re-write. Wish me luck – and have a lovely Sunday all!
Posted by Amanda at 22:14

What inspiring places to visit? I really must go there at some point, I know I'd love them.

Best of luck with the word count. I'm about to start another book, so my word count is also zero.

I love Agatha Christie. What a brilliant place to go.

Oh I'd love to go there. I don't think we're going as far west as that when we're in the UK. Shame.

what a fantastic place. Would love to go.

My family won't let me read my manuscript to them after dinner either;-)

Great photos. I'd love to have somewhere like that to go to every summer.

It really was, Debs, it's got me tempted to write a murder mystery!

Oh that's a shame, JJ. It's such a lovely part of the UK.

My family won't let me read them my manuscript any blinking time, Lane! ;-)

I went there once, years ago, and came away quite inspired! P'raps I need to go again ... :o)

It is inspiring, Karen! But I'm still struggling! ;-)