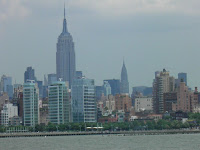 I've been on my travels, oh yes indeed. Visiting America and Canada - searching out magazines. Well not only searching out magazines because that would have made my hubby a wee bit cross – but I did pick up two copies of Woman’s World and I'm very tempted to send them a story at some point. Although they don't take email submissions which is a bit of a shame. They have Woman's World in Canada too, and I also saw our very own home-grown People’s Friend there, which made me rather proud.

On my return I received a lovely email from Liz Smith at My Weekly wanting to buy one of my stories – the sixth they've bought of mine - YAY! So my supermarket trips over the next little while will be rather exciting as I scan the mags for my stories - I'm waiting for two to appear in Take a Break Fiction Feast too. It certainly make up for those rejections.

Oh, and I’ve finally finished my A210 course with the Open University. The three hour exam took a lot of revising for - but I can honestly say, with pride, I gave it my best shot! However, it was so hard– and if I’ve passed it will be some kind of miracle. I won’t know until the middle of August, but I'll let you know - one way or the other - and then it’s on to my FINAL year – EA300 Children’s Literature. Not going to be easy, but I will get there - well if sheer determination has anything to do with it. :-))

My latest novel is chugging along nicely. I'm halfway through, and hoping to get it finished and out there to agents before the end of the year. So watch this space!