I’ve always been intrigued by Jack the Ripper. The murders as such do not interest me – I hate blood and gore. It’s the mystery that surrounds them and a keen interest in Victorian history, especially the East End of London, that draws me in.

I have many books on the subject, including, The Jack the Ripper Suspects by Stan Russo which cites 70 suspects – a must for all ripperologists, apparently. I bought it a few years back and it was fairly expensive then but now it sells on Amazon for £42.70 – ooh, er, I guess that makes me a ripperologist then!

You may be wondereing why I’m on about evil Jack today. Well I went on a Ripper Tour last Wednesday and it was absolutely fab. The combination of looking around the East End, a fantastic tour guide: Philip Hutchinson who co-wrote The London of Jack the Ripper (another great book) and actually seeing where the murders took place made for a brilliant evening.

You know, it’s quite strange – my novel isn’t a murder at all, and yet I’ve managed to thread in a couple of references to Jack the Ripper. And I've got a short story whizzing around my head, spurred by the evening, that I really must get down! Well, they say write about what you know, don’t they?

I was going to pop on my photographs, but they are very dark and only this one of The Ten Bells Pub came out reasonably well. It's said that in the early hours of November 9th 1888, Mary Kelly, Jack's final victim, left this pub to meet her demise. It's said too that Jack the Ripper haunts here. 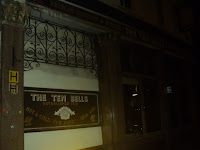 Please don't forget if you're interested in joining 'Womag two Weekly' there are still spaces - so do email me!
Posted by Amanda at 07:31

It is a fascinating story - if a little gory!

Hi Helen and Suzanne - Yes it is fascinating - as is the way the East End was back then. As the guide took us around it was like he was describing another world - hard to believe how bad it was just over 100 years ago.

Hi Amanda! I was sent a link to your blog out of the blue. Many thanks for your kind words (and not a single mention of a Dutch student). If you Google GHOST TOUR OF GUILDFORD you'll find an e-mail address for me on the website. Send across your pitch-black photos and I should be able to clean them up in PhotoShop so you can actually see them.

You'll probably find your interest in JTR & the East End tour will find a way into your writing again. It has inspired all sorts of fiction. I'm guessing you will find an original take on it and have to write.

Makes me wish I'd done the tour when I lived there.
Fascinating indeed.

Wow, Phillip, isn’t technology clever the way you found this post – good thing I was saying good things! Thanks again for a brilliant and memorable tour. I will take you up on the offer of the photos and send them over shortly, thanks for that. :-)

Hi Kat, yes I hope you are right! Trouble is there has been so many takes on the story, I think I may struggle to find something fresh – won’t stop me giving it a go though! :-)

I'm fascinated by the theory's that surround Jack the Ripper too. One of my Uni lecturers does ghost walks round the East End which also incorporates Jack the Ripper sites. I would love to go along...I think it would be fascinating!!

great story - there's a new film about Jack the Ripper with Michael Caine in I think.

Ooh that photo looks spooky enough! Sounds really interesting, and if you don't get a story out of it I will :o)

I've always found the Jack the Ripper story chillingly fascinating. I mean, what really happened and why? There has been so much speculation - if I got the chance, I'd love to do that tour!

Go for it, Carol - it's really worth it x

Ooh, I'll look out for that FP!

I better get one written quick then, Karen! :-)

It's really worth it Gaelikaa!

Hi Mandy, just got back from the tour ourselves, with a chap called John, a local historian. To see one of the girls in our group visibly jump from the spot where one of his victims was found was quite hilarious! Must get a book on the subject - which do you recommend? Jill xx

It's great fun isn't it Jill!? I would recommend Phillip Hutchinson's book - The London of Jack the Ripper, especially if you are interested in the area etc. x