I'm very excited to be interviewing Cally Taylor, author of the very wonderful, Heaven Can Wait. I've been following Cally's blog for almost two years, and she's an inspiration!

So welcome Cally, and on with the questions!

What was your inspiration when writing, Heaven Can Wait?

It sounds a little bit morbid but, after a friend from school died suddenly in 2006, I started thinking about death quite a lot. That, combined with a question my then boyfriend asked me – “If I died how long would you wait before you moved on and met someone else?” – gave me the idea for a woman called Lucy who died the night before her wedding and refused to go to Heaven.

If your book was made into a film – which of course it will be!! Who would you see playing the roles of Lucy and Dan? 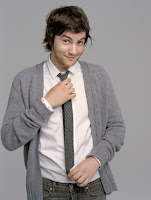 Oooh I wish! That’s also a really difficult question because no actors or actresses perfectly fit my mental image of Lucy and Dan but, if you forced me at gun point, I’d probably say Rachel Weisz as Lucy and Jim Sturgess as Dan.

Do you think the fact you had many short stories published helped make your agent and publisher sit up and take notice?

I think short story publications and/or competition wins show an agent that you’ve got a good track record when it comes to writing. By listing your ‘writing CV’ you’re demonstrating that your fiction has been critiqued by magazine editors and/or competition judges and found to have merit. Anything that helps convince an agent to give your novel some serious consideration has to be a good thing!
How long did it take you to find an agent? And did you have any agents turn you away?
It took me about a year in total. I started my search for an agent by sending off submissions to six agents that I’d shortlisted from the Writers and Artists’ Yearbook, choosing the ones that represented chicklit and/or women’s fiction and authors that I admired. That was in September 2007.
The first reply I received was a personalised rejection saying that, although she liked the premise, she wasn’t a fan of novels written in the first person! The second reply I received was a phone call from Darley Anderson, saying he really liked my chapters and could I send the whole novel. While I waited for Darley to read the whole manuscript I received another personalised rejection – from an agent with a massively successful chicklit author on her books - and a form rejection from another agent.
In January 2008 Darley rang me to say that, while my book had lots of potential, I had to edit it again and make a few changes before he’d consider signing me. I was disappointed that it wasn’t an immediate ‘yes’ but set to work editing my book (for the fourth time). While I was doing that another agent asked to see the full manuscript. She wasn’t keen on the supernatural premise but asked me to send her anything else I might write.
In July 2008 I sent my revised manuscript back to Darley Anderson and three long, long months later I finally received the phone call I’d been waiting from. It was Madeleine Buston, Head of Foreign Rights at the Darley Anderson agency. She said Darley had given her my manuscript to read on a long train journey up to Scotland and that it had made her laugh and cry. In fact, she said, she’d loved it so much she’d asked Darley if she could represent me!
I signed the contract to be represented by Maddie at the Darley Anderson Agency a couple of weeks later. It was September 2008 - almost exactly a year to the day since I first sent my chapters out.
And if you’re wondering what happened to the sixth agent I approached? I never heard back from him!

Had you ever considered sending out your first three chapters before your book was fully edited?

No. Everything I’d read on the web, and in author/agency interviews, said you shouldn’t send out your first three chapters until your whole novel is the best it can be. You only have one chance (unless you’re really lucky) to impress an agent and it’s no good wowing them with three beautifully edited chapters if the rest of your book is a disappointment. If they ask to see the whole manuscript and you haven’t polished it as much as your first three chapters you’ll end up with a ‘sorry, not for me’.

I think they are. There isn’t as much money in a publishing company’s budgets to promote debut authors as there used to be (and the recession doesn’t help) so it’s becoming much more normal for an author to help out with publicity. Readers also expect authors to have an online presence these days and if you don’t have a website/blog or twitter/facebook account you’ll miss out on valuable feedback and comments.

How long did it take you to write, Heaven Can Wait?

It took three months and three weeks to write the first draft and several more months to edit it several times over. Looking back now I can’t believe I managed to write the first draft so quickly but I was really driven, writing almost every night. I didn’t want to be the sort of person who talked about writing a novel; I wanted to be someone who actually completed one.

I find that it doesn’t matter how many good things are said – one negative one and I’m in pieces. How do you deal with negative comments?

Like a lot of authors I’m really sensitive to criticism and a bad review is incredibly wounding. So much so that you instantly forget all the lovely things people have said about your novel and become convinced that that critical reviewer is the only person telling the truth. It’s like if you ask ten people if they like your outfit and nine say it makes you look beautiful and one says it makes you look fat. You believe them (and if you’re anything like me you’ll go and change!).
I thought I’d managed to harden my skin against negative feedback after years of sharing my short stories with a particularly brutal online workshop and, to a certain extent I had, but you work so hard on a novel, for so long, and pour so much of yourself into it that it’s always going to hurt when someone says something cruel. Hopefully my skin will thicken up the more novels I write!

Do you find you dream about your characters?

I daydream about my characters but I don’t dream about them. That said I did have a dream when I was editing Heaven Can Wait that I was stuck in Limbo and trying to help people to escape by crawling through grey tunnels (I may also have been watching too much Prison Break at the time!).

Do you carry a notebook and pen everywhere?

Oh yes. I have done for about ten years. Back then I lived in London and would jot down ideas, observations or little phrases that popped into my head while I was on the tube. These days I normally use the notebooks to jot down ideas I’ve had for scene changes or edits, or ideas for new novels.

Are any of your characters based on real people or real events?

Ha! That would be telling! Most of the people in Heaven Can Wait are complete works of fiction but there’s a minor character who may or may not be based on someone I know/knew but I’m not saying any more for fear of being sued!

Who is your favourite author?

I’ve got so many – Roddy Doyle, Hanif Kureshi, Margaret Atwood and Douglas Coupland immediately spring to mind, but if we’re talking about chicklit it has to be Lisa Jewell. I think ‘Ralph’s Party’ was the first chicklit book I read and I fell in love with Lisa’s style and have read everything she’s written since. For male authors of chicklit my favourite has to be Mike Gayle.
Do you think the thrill of being a published author will ever wear off?
I really hope not! If the magic of writing novels and hearing about new deals from my agents wears off and I start dreaming about winning the lottery and doing something else instead it’s probably time to stop writing!

Thanks Cally for a brilliant interview! :-)
Posted by Amanda at 00:04

Great interview and answers! Catherine Alliot was the first chick lit author I fell in love with, and made me want to write something similar.

Can't wait for the film version of Heaven Can Wait :o)

Brilliant interview Mandy and some really revealing answers by Cally. I'm a very late comer to her blog but love to hear that you have followed Cally's progress over the last two years. Can't wait to get the book!

It's totally incredible that it took Cally more time to get an agent than to write the book. I am glad she mentioned it though, because unpublished writers (including myself) often thing that if we get that Novel done, that would be the end of all troubles and beginning of good stuff. Not necessarily the case, as I have learned from others' experience.

Again, more great advice and insight into being a published novelist.

Thanks Cally and thanks Amanda for hosting:)

Great interview, really enjoyed finding out a little more about this amazing author.

That's a really good interview. So interesting. And true about successes in short stories and competition entries. That's my current aim now, between the re-writes to get something to put on the query letter!

Fab interview Amanda and Cally. This publishing lark - it does all grind slowly, doesn't it? (And I think your experience Cally, was pretty quick!)

The wordy thingy is GUESS.

Guess what I wonder?

First time visitor here - what a brilliant interview. Thank you! I'm reading and loving Heaven Can Wait and I shall be popping back here soon.

Brilliant interview - great questions, great answers! Thank you both for putting it together!

Thanks, Helen – Cally certainly gives us all hope!

Hi Lost Wanderer – Yes, I think writing the novel is the easy part – which is a bit of a worry as I’ve been writing mine for a year and I'm still pulling my hair out!

Yes, Fia – She’s a diamond for sharing so much!

I’m so thrilled she’s shared so much with us, Bluestocking Mum! Good luck with your short stories and competitions!

It does, doesn’t it JJ ... I think being a writer is very much a waiting game.

Thank you, TF and Suzanne x

Thank you Leigh and Flowerpot!