So, it’s another brand new year.  And, like many of you, I always feel it’s a time for new beginnings. So here I am, AGAIN, attempting to be a good blogger, but this time I feel more determined than ever.

Sadly, I haven’t written much since then end of October. The well of inspiration dried up on me, as the ill-health of loved ones took over all my thoughts.

But I’m determined to get those creative juices flowing again.

But how do you do that?  How do you become inspired?  What triggers a story? How, when our heads are empty of ideas, do we create a short story?

Answers on a postcard please.

In the past, I’ve found inspiration from stories based on real-life. Like a story I have coming up in The People’s Friend that was based on an incident that happened to my father when he was an evacuee in World War II.  I took that incident, and created a fictional world around it, but all the time imagined my dad as a cheeky little boy of nine, as the main character.

Other times, I’ve heard someone, often a child, say something very funny, and used that to kick-start a story. 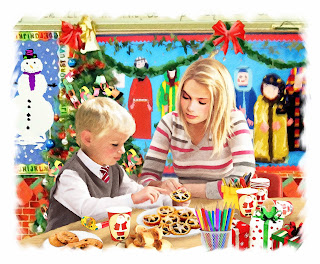 This smashing illustration by Ruth Blair was sent to me by The People’s Friend, and I was asked to write a story to fit it.  The story didn’t come instantly, but I kept looking at the picture, and eventually it started to fall into place. It appeared in a December 2016 issue of The Friend.

So, the thing is, I should be able to do it again. But I’ve been struggling. 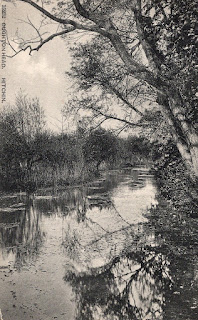 But then, as I was sorting through some old postcards to scan for my local history blog, one postcard, dated June  29th 1929, caught my attention.

It was of a local river, and I turned it over to see a message addressed to a Miss Parrot. 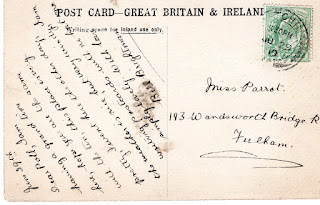 Dear Poll,
I am having a grand time here, hope you are the same...
This place is very pretty.  I went here the other day. The weather is nice, but very windy. I am writing postcards with no hat on. Simply lovely.
With love,
Bill Brightman.

My mind started whizzing.  Was Poll her real name, or a nickname because of her surname?  Was Bill a friend?  Did he love her?  Did she love him?  Why wasn’t she with him?  Had he got dark hair? Twinkly blue eyes?  Why had he sat by the river? Was he an artist? A successful one? Who else was he sending postcards to?  Did Polly Parrot wonder that too?  Did they end up together, and live happily ever after, or was Bill a bit of a cad?

So I now have my inspiration, and a story itching to be written. I just hope I can get it down.

And I think I just need to try to remember that when that well dries up, inspiration is everywhere.
Posted by Amanda at 07:10

Lovely to see you here Mandy. It's so hard when worry and life get in the way isn't it and I sincerely wish you an easier time in 2017.

Ah - inspiration. It is indeed everywhere, IF you can see it, and sometimes that's the very hardest thing to do. But eventually something sparks, I often find song titles set something off, or just ordinary titles. I swear everybody shuts up when I'm around cos I never hear these inspiring snips of conversation others seem to experience!

Good luck with your new story. It'll be a cracker like all your super stories :-) xxxx

Yes, song titles and book titles are all great inspirations, aren't they? But you're right, it is about seeing them, and sometimes when your head is too full, it can seem impossible.

Real life has a horrid way of taking over at times, and it's hard to be creative when it does. Let's hope 2017 is a happy, healthy and productive one :o)

I love the PF illustration, and the lovely postcards are perfect writing inspiration. My husband has a collection, and it's fascinating to read little snippets of past lives and imagine how they came about. I'll look forward to seeing one written up and in print very soon!

Yes, sadly real life can put a stop to those creative ideas at times.

Postcards really are fascinating. What I found interesting to, is how extremely polite everyone was back then, and how lovely their handwriting was - and nearly all of the postcards that I've got apologise for not writing sooner.