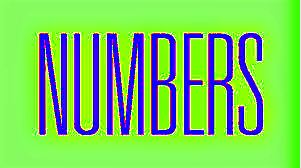 Does anyone else get REALLY freaked out confused about which numbers to use when writing fiction -  words or numerals (symbols)?

OK, I admit I'm scared of numbers. I blame my math's teacher, the scary number-people who lived in my wardrobe as a child, and the last look at my finances, for my fears.

But - brave or what? I set out on a quest to find out if there is a wrong or right way of recording numbers. Yes, I  donned my deer-stalker, grabbed my 2 two sniffer dogs, and investigated the subject of writing numbers.

I discovered that NUMBERS FROM ONE TO NINE should be written as words.  Ten out of ten for that one, Amanda!.... or should that be, 10 out of 10?

But for ALL OTHER NUMBERS, it transpires the choice is yours as long as you are consistent.  Although many clever-clogs people agree that writing smaller numbers like ten, thirty, ninety or even a thousand is a pretty good plan.  Longer numbers like 496 or 26 are better written as numerals.  But if you choose to write numbers like 26 as twenty-six, don’t forget the hyphen.

However, you should use numerals when referring to UNITS OF MEASURE, like minutes, mph or centimetres – or, indeed, decimals and fractions.  E.g. 70 mph, 7 centimetres etc.

The same goes for DATES – these should always be in figures:  31st December 1982

AGES should be written out if between ONE and NINE  -  numerals, it seems, are preferred after that.

MONEY should also be in numerals. £30.25.  However, if it is an estimated amount of money, the numbers should be written.   E.g. ‘That’s worth about twenty pounds.’

TWO NUMBERS NEXT TO EACH OTHER  (Gosh, this is getting so complicated I may need a lie down after this post.)  Well it seems we should spell out one word– probably the one with the least letters - and use a numeral for the other.

Another little tip I picked up along the way, is that you should add a hyphen if the number modifies a noun.  For example:  The 12-year-old girl.

By Jove, I think I’ve got it.  Although I’ve got a right ol’ headache now.

N.B. If anyone thinks any of the above is incorrect, do shout - but not today as my head hurts.

Labels: How to Write Suggestions

Oh my goodness, Amanda. I had no idea about any of this - throw in random digits and words for numbers all over the place. I am saving this and will refer to it from now on. Brilliant detective work!

I follow most of those, although I tend to spell out most numbers when they refer to an amount.

Thanks Wendy. I had no idea either - thank goodness all the lovely magazine editors were happy to correct my number-mistakes! :-)

I tend to glaze over when numbers come into the equation (see what I did there?) so this is REALLY useful - I always get confused!

So glad you will find it useful, Karen. I hope I remember use all this at least a 'fraction' of time. (see what I did there?) Not as good as your 'equation' admittedly!

Numbers have been a constant source of worry to me! I just have to see one and I start to sweat - they muddle round on the page too so I don't see them as I should.

Thank you for this brilliant post - I have always wondered about how to put numbers in stories and always thought it was just me :-) x

You'll be getting a lot of hits on this one, mostly from me!

I feel exactly the same, Teresa. In fact, I've just written a story and I'm honestly not sure I've actually captured the numbers correctly even now. :-) X

I think you also need to be consistent. If for example you wrote something with several numbers in and most were ten or under but one was 3,046 it might seem odd to just have that in figures when the rest were written out.